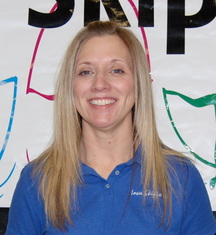 Kathy Szabo has taught in the Cedar Rapids Community Schools for fourteen years. She began her teaching at Cleveland Elementary and presently is teaching physical education at Coolidge Elementary. In 2012, Kathy was awarded the Iowa Elementary Physical Education Teacher of the year Award.  She has been involved with the Skippers for fourteen years beginning as an assistant coach and taking over co-directing the team in 2002. Kathy has been involved with Jump Rope for Heart for fourteen years. Her school was the top big school fund raiser last year. Kathy and her husband, Chad who is also an administrator in the Cedar Rapids Community Schools, have four children.

Sue Bullis taught in the Linn Mar and Cedar Rapids Community Schools for over thirty years including McKinley, Roosevelt, and Harding Middle Schools and Wilkins, Hiawatha, Garfield, Monroe, and Grant Wood elementary schools and is presently retired. Sue has been involved in the Skippers for over twenty years  and took over co-leadership in 2002. Her daughter, Jessica was a member of the group for several years. She was involved with Jump Rope for Heart throughout her career. She enjoyed coaching gymnastics, track, tennis and volleyball as well as coaching the Skippers. Sue also was involved with a number of AAU volleyball activities in the area. Sue and her husband, Tom have two daughters and two grandchildren.