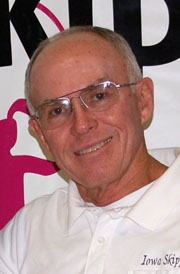 Hal Garwood taught in the Cedar Raids Community Schools for 35 years. He taught at Truman, Van Buren and most recently Jackson elementary Schools. In 1999, Hal Garwood was awarded the Iowa Elementary Physical Education Teacher of the year Award. Besides teaching PE, Hal also coached a variety of sports within the Cedar Rapids District. Hal is a member of the Cedar Rapids Ice Skating Hall of Fame.Hal joined the Iowa Skippers Jump Rope Team in 1990 and was with the group until his retirement in 2002. Through his involvement in Skipper Magic Jump Rope Team of Marshalltown, Hal enjoyed the opportunity to travel with that group to Australia. Has participated in Jump Rope for Heart for over 20 years. 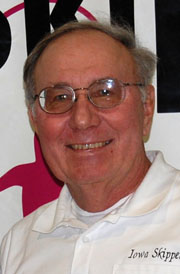 Jim Patterson taught in the Cedar Rapids Community Schools for 36 years. Most of that time was at Coolidge Elementary on the westside of Cedar Rapids. In 1986, Jim was the first recipient of the Iowa Elementary Physical Education Teacher of the year Award. Besides teaching PE, Jim coached a variety of sports while in the Cedar Rapids School District and is also an athletic official in both football and track. In 2002 he was inducted into the Iowa High School Athletic Officials Hall of Fame.Jim created the Iowa Skipper Team in 1989. Jim did Jump Rope for Heart for over 20 years. Under the direction of Hal Garwood and Jim Patterson the Skippers have performed at many athletic events and school assemblies in Iowa. Performances include University of Iowa, Iowa State University, Northern Iowa University, Jefferson and Kennedy High Schools, Parades, Civic Groups and two performances at the Girls State Tournament with the final one being the 4A Sate Championship Game on state wide Television. Jim's daughter is currently an assistant coach and has two granddaughters on the Iowa Skipper team.

Hal Garwood and Jim Patterson were awarded the Honor Award (2002) by the Iowa Association for Health, Physical Education, Recreation, and Dance, the organization's highest award.